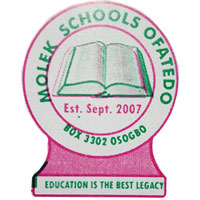 MOLEK Schools are a group of schools offering both Western and Islamic education from Pre-Nursery through Primary to the Secondary Classes.
The school is co-educational, and admits children of all religious faiths, who are ready to abide by the school Rules and Regulations in line with Islamic way of life. No child is compelled or induced to embrace Islam as “there is no compulsion in religion”.
ESTABLISHMENT
MOLEK Schools -  derived from ADEMOLA and AYANLEKAN (the Proprietors). The school commenced operation as MOLEK Nursery/Primary School on Monday, 3rd September 2007 on her present and permanent site, preceded by a special prayer on Sunday, 2nd September 2007.
There were only two (2) pupils and six (6) staff on the first day (03/09/2007). The pupils were Raji Abdul-Samad Ayodeji (Primary 1) and Raji AbdulBasit Ayomide (Primary 3), both of the same parents.
The foundation teaching staff were Mr. Basheer M.T. (Head Teacher), Mrs Adegbite M.F., Mr S.O. Abubakar and Mrs O.F. Alagbe. The two non- teaching staff then were Mr. Clement Olatunji (Driver/Gardener) and Mrs Deborah Olubola (Cleaner).
Glory be to Allah, the population of the pupils rose from only two (2) on 3/9/2007 to nineteen (19) by the end of the 2007/2008 session in July 2008.

At present, MOLEK Schools offer education in the following areas:
For MOLEK Schools Teaching method, internal attractions in form of incentives, progress made so far since inception, and our destination; click here MOLEK at a Glance